The word "orchestra" is Greek in origins, and originally meant the place where Greek chorus sang and danced. The term was revived during the late 17th century and evolved to mean the players themselves. Orchestras has its roots from the 16th century consorts employed in noble households, and to groups of instrumentalists especially assembled for important occasions. After that, the formation and evolution of orchestras are as followed in the four periods. 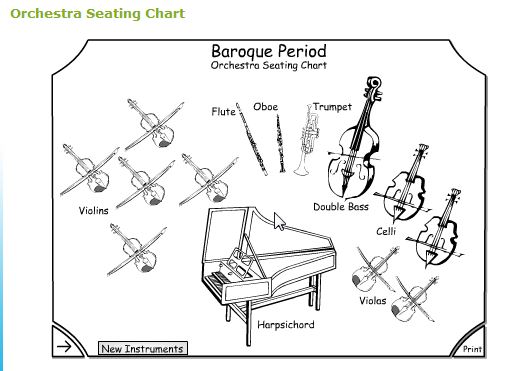 In Baroque music, strings were the most important part. Baroque orchestras had from 10 to 30 players, primarily strings. In the Baroque orchestra, the strings and winds played the same sort of music melodically and rhythmically. The woodwind and brass were used as melodic instruments but later they were mainly used to sustain the harmony. In the baroque period, the orchestra was not standardised in size. There were large differences in size, instrumentation and playing styles - and therefore orchestral soundscapes and palettes - between the various European regions. The 'Baroque orchestra' ranged from smaller orchestras or ensembles with one player per part, through to larger scale orchestras with many players per part. 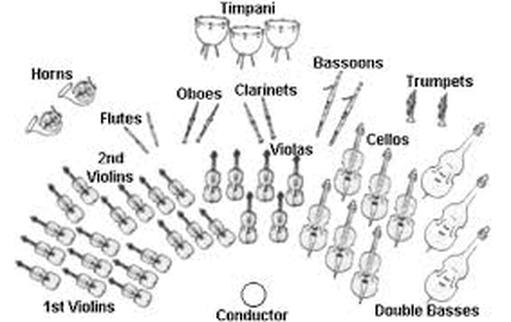 Classical orchestras used 30 to 60 players in four sections: strings, woodwinds, brass, and percussion.  Classical composers exploited the individual tone colours of instruments and they do not treat instruments interchangeably. A classical piece has greater variety and more rapid changes of tone colour. Each section of the classical orchestra had a special role. The strings were the most important secion, with the first violins taking the melody most of the time and the lower strings providing an accompaniment. The woodwinds added contrasting tone colours and were often given melodic solos. Horns and trumpets brought power to loud passages and filled out with the harmony, though they do not usually play the main melody. Timpani were used for rhythmic bite and emphasis. As a whole, the classical orchestra had developed into a flexible and colourful instrument to which composers could entrust their most powerful and dramatic musical conceptions.

Romantic orchestras had as many as 100 players or more, and featured greater use of brass and piano. Romantic music as a movement evolved from the formats, genres and musical ideas established in earlier periods, such as the classical period, and went further in the name of expression and syncretism of different art-forms with music. Romanticism does not necessarily refer to romantic love, though that theme was prevalent in many works composed during this time period, both in literature, painting, or music. Romanticism followed a path that led to the expansion of formal structures for a composition set down or at least created in their general outlines in earlier periods, and the end-result is that the pieces are "understood" to be more passionate and expressive, both by 19th century and today's audiences. Because of the expansion of form (those elements pertaining to form, key, instrumentation and the like) within a typical composition, and the growing idiosyncrasies and expressiveness of the new composers from the new century, it thus became easier to identify an artist based on his work or style. 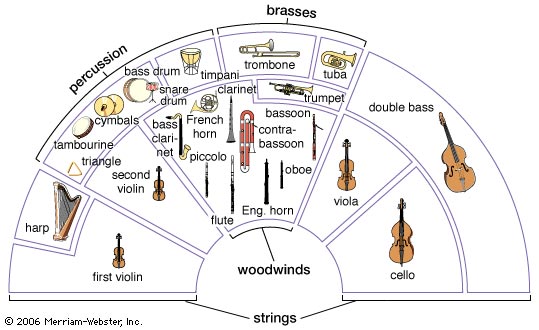 Modern orchestras are a bit smaller than in the Romantic Era (symphony and other very large orchestras still exist). Some may focus on the unique (or even bizarre) sounds of individual instruments.
The modern symphony orchestra varies in size, but typically has a strength of about 100. The largest lot of these are from the strings, which contain some 60 to 70 players. This typically comprises some 16 first and second violins, 14 violas, 14 cellos and 8 - 10 double basses. However these numbers are sometimes reduced when playing 17th century pieces to simulate a 17th century orchestra.
Next is the woodwinds which are usually composed of 2 flutes, a piccolo, 2 oboes, one cor anglais, two clarinets, 1 bass clarinet, 2 bassoons and a double bassoon. Then there is the brass, which normally consists of 2 trumpets, 3 trombones (2 tenor and 1 bass), a tuba and 4 horns.

A symphony orchestra and a philharmonic are the same thing—sort of. They’re the same size and they play the same kind of music. The two terms exist to help us tell different ensembles apart, especially in cities that boast multiple groups. (NYC is home to the Brooklyn Philharmonic and the Brooklyn Symphony. They’re the same kind of orchestra, but they have different names so you don’t confuse them.) The divide between symphony-philharmonic is just a matter of identity.
Powered by